Bob Basset is having the exhibition in Pery 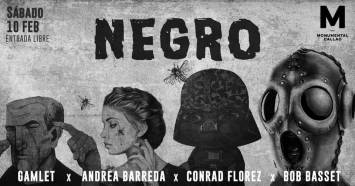 From 10th February until 3d March, Bob Basset art-studio will be taking part in exhibition «NEGRO» in the Art Centre Monumental Callao (Lima, Peru). Ukrainian artist Gamlet Zinkovsky also intends to visit Peru. He will join the exhibition along with the co-founder of Bob Basset art-studio, Sergey Petrov. The Ukrainians accepted an invitation of the local artist Conrad Flores. The fourth participant of the exhibition will be Andrea Barreda.

On view in the exhibition will be 6 Bob Basset’s masks, 23 Gamlet’s drawings and 6 Peruvian’s paintings (3 from each).

Sergei Petrov said that he’d met Conrad Flores by chance. It happened on Facebook where Bob Basset’s co-founder noticed the picture of Conrad Flores’ painting with the character who was wearing Bob Basset’s mask. This mask Bob Basset art-studio had made for the Slipknot’s band member, Sid Wilson.

“I admired the picture and wished to find the artist. Fortunately, the subscribers helped me and we began messaging. ” – told Sergei Petrov. “In a short time, I turned out that Conrad is Slipknot’s fan. We’d been making masks for their member Sid Wilson for three years. It became obvious that our tastes had a lot in common. Later on, Sid Wilson had a concert in Lima and Conrad met him. After a while, I’d gifted Conrad 2 masks and he painted them in his unique style. Thus, they became a unique example of the Ukrainian-Peruvian art. By the way, on my Birthday, Conrad gifted me that very painting, thanks to which we’d met.”

This is not the first joint project of Bob Basset and Gamlet Zinkovsky. In 2016, at the ADDICTION A L’ŒUVRE festival in Paris, was presented their video art collaboration.